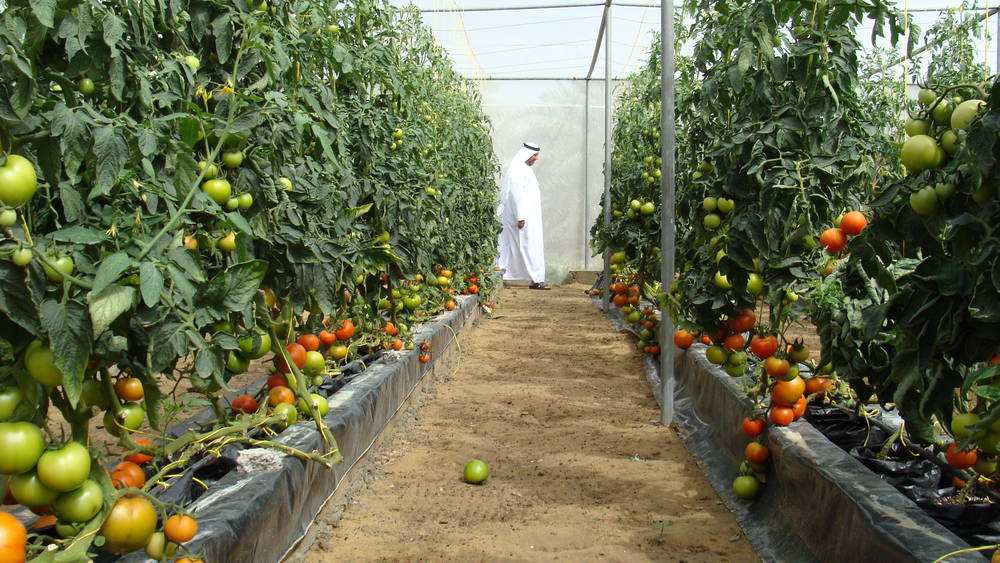 12 January 2020.  The scarcity of arable land and water has limited the growth of agriculture in arid lands like the Sahel and the Arabian Peninsula (AP). Considering the limited potential of the farming sector, optimizing the use of these limited resources for crop production in agricultural development is one of the biggest challenges facing any decision-maker, including the end users and growers.

The problems facing agricultural production systems are to increase the productivity, to improve the product quality, and to manage natural resources more efficiently. Indeed, developing sustainable and improved farming systems would have a significant impact on helping desert countries to be less dependent on food imports.

Family agriculture in desert conditions in different geographical areas can hugely benefit from the experience with protection technologies such as:

ICARDA and NARS have developed net houses throughout the Arabian Peninsula since 2008.

Net house is a greenhouse structure covered by an insect proof net which can allow vegetable production in desert conditions 8-9 months of the year with high yield. Studies in the region have shown that the net benefit income of net-house in 8-9 months is about the same as cooled greenhouses in 12 months due to savings in cooling water and electricity and other costs.

Net house technology, after its introduction by ICARDA and NARS, has been accepted widely in the region by policy makers and end-users. For example, in UAE, the Ministry of Climate Change and Environment has supported many growers since 2009 to adopt such techniques. Similarly, in Oman, Qatar, Bahrain and Saudi Arabia growers are adopting net houses.

Considering the average monthly temperatures, the production of high value cash crops such as tomato and cucumber can be carried out at least for 8-9 months of the year under the net house. The net house protects crops from the harsh environment, while providing them with good ventilation, and additional benefits of protection against pests and diseases. In UAE, the production of cucumber crop under cooled and net house was studied at 18 farms in three different regions. The results show that net house production in winter are as high as cooled greenhouses.

One of the constraints of production under net houses is the limited production period compared to greenhouses. Even with savings from the reduced cost of establishment, water and energy for cooling, and profits about the same as from cooled greenhouses, growers still prefer their greenhouses in production year around.

To address this, ICARDA is working on different innovative solutions including spot cooling (SC) and root zone cooling (RZC) combined with utilizing solar energy. The RZC shows promising results. ICARDA-APRP supported a PhD study in Oman to build a locally developed system for controlling the nutrient solution to the ideal temperature of 18-29° C. The studies show that cucumber yield in hydroponics during summer can significantly increase with utilizing the RZC. Furthermore, ICARDA is conducting a joint experiment with American University of Ras Al-Khaima on spot cooling concept in greenhouse using solar energy with some promising results.

The production of high value crops requires a certain quantity and quality of water that is practically impossible to obtain in desert agriculture such as the Arabian Peninsula.

The present conventional growing system for vegetable crops involves a lot of water wastage due to evaporation, run off and deep percolation. In arid countries like those in the Arabian Peninsula, rapid evaporation from the soil surface may also lead to salinity problems. Limited natural resources for fertilisation and increased soil borne pathogens and salinity are limiting the agricultural development.

Soilless culture techniques offer: (a) supply of water and nutrients optimum for plant growth, (b) minimal water loss by evaporation, due to the narrow width of the growing channels, and (c) elimination of drainage water loss, since water is returned to the tank for recycling (closed system).

Since the year 2000, ICARDA has conducted several collaborative adaptive research and agro-economic studies with NARS scientists in the Arabian Peninsula (AP) countries on soil-less culture in greenhouses under desert conditions.

Yields were increased significantly and productivity per unit water increased by more than 70% compared to soil-based systems. Now a large group of growers has adopted this production system. In 2017, more than 1020 and 350 greenhouses were converted to soilless system in UAE and Oman respectively.

The main disadvantages of soil-less systems are the initial cost and the increased technical demands associated with management. The cost of installing such a system is high, and, at first sight, might seem prohibitive, especially for smallholder farmers. But, through increased production and savings in labor, water, energy and fertilizer, growers can recover their initial investment quickly.

The extensive use of chemicals to control diseases and pests in greenhouses results in complex problems of insect resistance, and health and environmental hazards. Crops can be protected by control measures that avoid heavy reliance on pesticides. These control measures are part of an Integrated Production and Protection Management (IPPM) program developed by ICARDA.

IPPM technology, after being introduced by ICARDA and NARS, has been accepted widely in the Arabian Peninsula region by policy makers and end-users. About 70 to 80% of growers have adopted the IPPM package in Oman and UAE. The initial adoption of IPPM practices in research stations and by some growers in the Gulf Cooperation Council countries, Yemen and Afghanistan was successfully proven by the production of high yield and quality of fresh products free of pesticide chemicals.

The main constraint for further expansion of IPPM is training the growers and end users on the proper selection, combination and application of IPPM techniques.

However, a socio-economic study in Dhamar (Yemen) compared two greenhouses with and without IPPM application. IPPM resulted in the reduction of pesticide spray from 22 times to 2- or 3-times, using safe pesticides. It gave better yield per unit of area and 53% increase in net return compared to the control green houses. It involved keeping the relative humidity low, covering ventilation with insect proof nets and using plastic mulch as well as applying irrigation sparingly. Plants showed to be strong and healthy, with low incidences of pests and disease. Application of IPPM increased water use efficiency by about 50% and cut down the pesticide applications from 18-22 to 2-3 per season. Yield of cucumber was 15.2 kg/m2 under IPPM while in the control the total yield was 12.9 kg/ m2.

Accordingly, the water-use efficiency was significantly better under IPPM (32.5kg/m3 compared with 21.8kg/m3 for the control). Farmers’ assessments of the IPPM technique were positive. This was reflected in the increased demand for the mesh and plastic mulch in the local markets, which could be inferred that more farmers will ensure the use of IPPM technique because of the obvious benefits gained.

ICARDA started in 2004 a three- year project for transferring the simplified Protected Agriculture (PA) for cash crops production to Afghan growers. This was the first time PA was introduced to growers in Afghanistan.

The project was designed with the main aim to promote the adoption of affordable and sustainable high intensity production system for cash crops using marginal or otherwise non-productive lands and with high water productivity. This was achieved by installing simple greenhouse structures at selected pilot farmers’ sites. The criteria for selecting the farmers were based on group discussions and farmers’ meetings in which the concepts of the project were discussed.

The project originally covered 65 growers in six provinces and helped them to produce high quality cash crops. PA and associated techniques, including Integrated Production and Protection Management, have been simplified for adoption by growers who have never worked with greenhouses. All participating farmers were from the active segments of the farming communities in Kabul, Kunduz, Parwan, Ghazni, Helmand and Nangarhar. Many family members including women and children were involved in the greenhouse’s day to day production and management.

Beside the positive impact on rural-family nutrition and food security, the impact of the greenhouse technology on growers’ incomes was assessed. All growers interviewed have not changed their cropping patterns, including the number of crops or the size of land they cultivated prior to their induction to PA. Therefore, for these farmers the greenhouses were “add-ons” to the portfolio of crops they grow and to their incomes.

Protected Agriculture contributed up to 135% increase in income generated from crop production in 2005. This economic success has somehow catalyzed the interest of farmers who expressed their willingness to accept more structures. In Afghanistan, most rural people produce to meet their own food needs and are thus involved in subsistence agriculture. Protected Agriculture provides opportunities for market oriented and high-quality cash crop production which significantly increase smallholder farmers’ income.

“I have so far harvested 9000 cucumbers. The plants are very healthy, and I have no problem inside my plastic house. I am expecting about 1500-2000 more cucumbers to be harvested. When I installed the plastic house, my neighbors were suspicious, but now they wish to have a plastic house in their farm. The Governor of Kunduz and many growers visited my plastic house and tasted my cucumber.” Mr. Gous Mohamed, Grower from Kunduz

The main constrains included relatively low level of know-how among growers which led the project to organize several training courses. The availability of greenhouse structures was also another shortcoming.

The project developed a Protected Agriculture Center in Kabul with a workshop for manufacturing greenhouse structures. The same center was also equipped with 4 greenhouses and classrooms to be used as training facilities where 360 growers, extension agents, and researcher were trained on Protected Agriculture. Local technicians were also trained in manufacturing aspects and most of the items required were purchased locally. Most of the machinery was also purchased locally. Establishment of this facility contributed tremendously to reducing the initial capital that was required to invest in the structure. The workshop produced good quality greenhouses for about 40% less than the cost of imported ones.