Home/Paepard/FARA Led S3A receives a boost as Uganda, 13 other countries to commit 1% of their budget for agricultural research

FARA Led S3A receives a boost as Uganda, 13 other countries to commit 1% of their budget for agricultural research 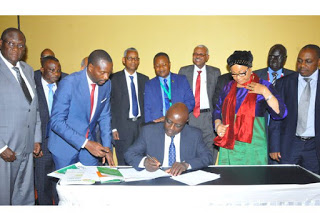 Uganda’s Minister of Agriculture, Animal Industry and Fisheries, Mr Vincent Bamulangaki Ssempijja, also the chairperson of the ASARECA Council of Patron Ministers signs the Communique in the presence of his counterparts from other countries. Together they committed to increase funding dedicated for agricultural research.

In a move to address the glaring food insecurity several African countries are facing, Uganda and 13 other continental states have committed to increase funding for agricultural research in their respective countries.
In a communique, the ministers of agriculture from the 14 African countries, including Uganda, pledged on behalf of their respective nations to dedicate at least one percent (1%) of their total national resource envelop to agricultural research in line with the Forum for Agricultural Research in Africa’s (FARA) Science Agenda for Agriculture in Africa (S3A) agenda.
For Uganda whose next budget (2019/2020) is estimated at Shs39.5trillion, the fund allocation for conducting agricultural research shouldn’t be less than Shs395billion. Should this happen, then it will be a record budget allocation and a statement of intent from the government.
Despite the capabilities and availability of human resource in this area, agricultural research in African countries has for decades been relegated to the periphery.
Most agricultural research in Africa are donor funded which according to the executive director of Forum forAgricultural Research in Africa (FARA), Dr Yemi Akinbamijo, has robbed of the conscious of continental scientists and researchers, urging continental government to take up research funding responsibilities.
And for that, the ministers of agriculture from the 14 countries in the continent, mostly drawn from Eastern, Central and Southern African, now want the casual manner in which agricultural research is treated in the continent to stop forthwith.
“Aware that in Eastern, Central and Southern Africa, the challenge of feeding a growing population is projected to double by 2050 has to be met, that despite a degrading resource base coupled with global climatic and economic changes, where smallholder agriculture remains the centerpiece of our countries’ economies, that confronting this challenge while protecting the natural resource base involves finding innovative and sustainable ways to produce more food with less resources,” reads the communique signed by the Ministers responsible for Agricultural Research from 14 countries in Kampala, Uganda, on Friday last week.
Cognizant of the need to use the land resources in ways that will ensure its health and sustainable access to future generations, they committed to: “Conservation agriculture-based sustainable intensification (CASI) practices, including practicing minimum tillage, maintaining permanent soil cover and mulches.
“This is in addition to the implementation of crop diversification practices (such as cereal legume intercropping and rotations), as tested through the sustainable intensification of maize-legume cropping systems in eastern and southern Africa (SIMLESA) program and similar multidisciplinary research efforts show promise in boosting and stabilizing productivity and safeguarding the resource base in the face of climate change.”
Importantly perhaps, they committed to mainstreaming Conservation agriculture, institutionalisation efforts that support scaling and networking, integration into agricultural research and extension systems and fostering value chains development.
Part of the communiqué committed to reducing drudgery especially for women farmers and laborers; as well as attracting youth talent into agriculture. Supporting agribusinesses willing to invest in rural innovation and market development was also highlighted.
Promoting collective institutions to enable farmer integration into markets, supporting the development of smallholder machinery value chains through, local-level training for entrepreneurs and supporting market innovations that enable low-cost farmer learning and experimentation was conspicuous in the communique.
Time to walk the talk
Uganda’s Minister of Agriculture, Animal Industry and Fisheries, Mr Vincent Bamulangaki Ssempijja who is also the chairperson of the ASARECA Council of Patron Ministers, after signing the communique said it is time research is promoted in Africa, saying their gesture (signing the joint communique) stress the call for research funding and promotion in all the continental states.
For scientists and researchers involved in the agricultural sector to fulfil their potential he said: “At least one percent of the total national budget of the country should be geared towards agricultural research because without that it will be difficult to overcome food insecurity threats that is already widespread across the continent,” said Mr Ssempijja.
As for Amb. Josefa Leonel Correia Sacko, the African Union commissioner for rural economy and agriculture, without research in agriculture, the continent should forget about agricultural transformation which helped propelled the economies of most European countries.
But before that the executive director of ASERECA, Prof Jean Jacques Mbonigaba Muhinda, said the role of research in agriculture has never been that crucial as it is today. He said the agricultural sector is evolving and without research it will be difficult to keep pace with the changes, most of which have far reaching effects on the livelihood.

And the head of Uganda’s delegation in the ASERECA Council of Patron Ministers Summit, the State Minister for Agriculture, Mr Christopher Kibanzanga, was of the view that African countries, including his own, Uganda, should invest where it reaps most and that is in agriculture.

Governments that signed a joint communique in Kampala on May 03, 2019;
Sourced from: https://www.monitor.co.ug/News/National/Uganda-13-other-countries-commit-1–budget-agricultural-research/688334-5104538-kj7xfj/index.html