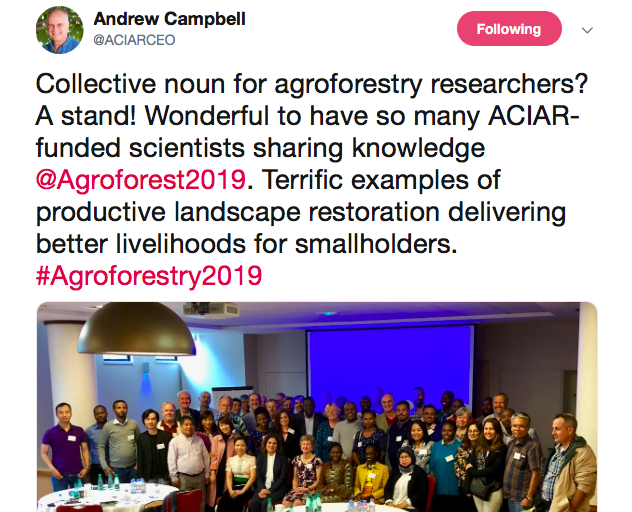 This international event was organized in Europe for the first time, by CIRAD and INRA, in partnership with World Agroforestry, Agropolis International and Montpellier University of Excellence.

The 4th World Agroforestry Congress bridged the gap between agroforestry science and its practical implementation worldwide. Over 1,200 attendees from all over the world presentied new research and sharing ideas for implementation of this agricultural technique that is good for food security, biodiversity, the climate, and more.

One topic gaining extra attention at this Congress was the involvement of the private sector in boosting agroforestry’s implementation worldwide, because it can be quite profitable to do so while also supporting people and planet.
Agroforestry combines trees alongside shrubs, crops and livestock in systems that produce food, support biodiversity, build soil horizons and water tables, and sequester carbon from the atmosphere.

1,200 plus attendees streamed into workshops and swirled among some 600+ posters hanging in the halls which outline new agroforestry research, underpinning the notion of agroforestry seeming a rather academic topic, yet this group is exploring many angles to advance this climate- and biodiversity-positive agricultural practice.

“There are journalists here from 30+ media outlets from many countries here, and French TV produced four stories about it last week. Also, we had 1,850 people attending the public event on Sunday we organized with the French Association for Agroforestry. These facts are proof that the Congress is bridging the gap between science, society and policy, which is the event’s goal.” Emmanuel Torquebiau, Congress organizer and senior scientist CIRAD

Because agroforestry is seen as a solution for this issue while boosting food security levels and biodiversity in the agricultural landscape due to its incorporation of useful trees and shrubs with annual crops, Mongabay has been producing a series highlighting its global implementation for the last year.

Extract of the programme:
Plenary session 2: Agroforestry and climate change