Home/Paepard/Stability in the 21st Century: Global Food Security for Peace and Prosperity

Stability in the 21st Century: Global Food Security for Peace and Prosperity 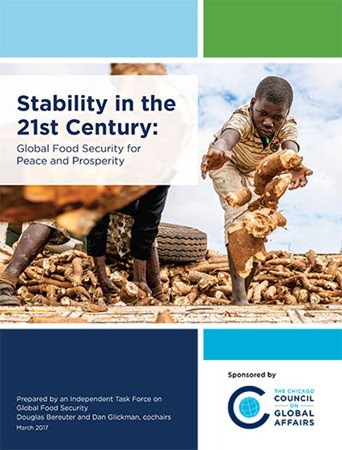 30 March 2017. As the new administration and Congress debate the appropriate balance of US diplomacy, foreign assistance, and military strength in light of modern security challenges, the Chicago Council on Global Affairs has issued a report on how US efforts to fight food insecurity around the world can provide increased security and economic vitality at home.

Bipartisan leadership from the United States and action by the global community over the past 25 years has led to impressive results in the fight against the destabilizing forces of food insecurity. The US government, in close cooperation with the private sector and university system, is well positioned to expand its legacy of commitment to food security and not only bolster the livelihoods of millions of smallholder farmers and entrepreneurs around the world, but also open up new business opportunities and partnerships in emerging economies.

29-30 March 2017. Washington, DC. The Global Food Security Symposium 2017 brought together key multi-disciplinary stakeholders and members of the next generation to discuss how investments in global food security promote peace and prosperity worldwide. Convened annually by the Council, the Global Food Security Symposium discusses the US government and international community’s progress on addressing global food and nutrition security. At the symposium, the Council also released a major report recommending specific actions that the US government can take to bolster global food security in the face of emerging challenges.

For the first time, the symposium was a two-day event. Prior to the full day of presentations and report release on March 30, the Council offered an additional day for participants to engage in solution sessions with global partners.

How might food and nutrition security become a more central component to national security strategies? What might we do to plan and act in anticipation of evolving food security challenges in the face of continued demographic shifts and increased migration?

Discussion – Transforming EconomiesGrowth is not always inclusive or evenly distributed, which can widen gaps between rural and urban areas, women and men, and those with access to education, information, and capital—and those without.

Discussion – Leveraging the Power of R and D (the video -below- of this debate starts at 5h10)
As the climate changes, agriculture must also change and adapt to increased temperatures, more erratic rainfall, flooding, and increased pests and diseases. Increased population growth will also require greater productivity from a finite natural resource base. The only way to stay ahead of these dynamics is to invest in R and D to find durability. Public investments in R and D are critical for scientists engaged in blue sky research—potentially groundbreaking studies that could take decades to understand—and applied science that can help us respond to the next rapidly moving threat. Both play a critical role in helping America’s farmers compete globally while simultaneously offering breakthroughs that have increased food and nutrition security in some of the world’s most vulnerable places.

The Foundation for Food and Agriculture Research builds unique partnerships to support innovative and actionable science addressing today’s food and agriculture challenges. The Foundation was established by the Farm Bill passed in 2014 and charged with complementing and furthering the important work of the U.S. Department of Agriculture. Leveraging public and private resources, FFAR will increase the scientific and technological research, innovation, and partnerships critical to enhancing sustainable production of nutritious food for a growing global population. To maximize the Foundation’s impact potential, FFAR is committed to complementing and not duplicating existing research endeavors.
THE FOLLOWING PROGRAMS ARE CURRENTLY OPEN FOR PARTICIPATION:

Related:
Six years after its publication, Council senior fellow Roger Thurow returns to Western Kenya to revisit the farm families first profiled in his book, The Last Hunger Season. Learn how much progress the families have made while consequently seeing the challenges they still face. Powerful imagery brings their stories to life while Thurow also examines the US legacy of supporting the eradication of hunger at home and abroad.