Home/Paepard/ARD Brokerage: from assumptions to reality

ARD Brokerage: from assumptions to reality 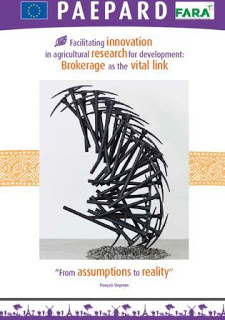 Initially set up in 2007, PAEPARD was formed to question why agricultural research partnerships were often not balanced, and why competitive funding applications with African partners were also often unsuccessful.

This paper highlights lessons learned from the development of PAEPARD-supported consortia, which illustrate various impacts of brokerage.

A number of assumptions have been used in the implementation of PAEPARD II, which PAEPARD consortium partners have worked to refine over the years. The most important assumptions included:

Since 2010, some 55 concept notes and proposals have been submitted by PAEPARD-supported consortia. And, as of early 2016, 21 submitted proposals have been selected for a call organized by a diverse group of donors.  PAEPARD was able to influence donors on the focus of their calls, lobbying for specific funding for an under-supported (participatory) research field such as, for example, the aflatoxin contamination of food and feed.

The preliminary conclusions and recommendations may appear obvious at first sight, but will be useful for informing the implementation of brokerage activities until PAEPARD activities come to an end in December 2017.