Home/Paepard/The State of Food and Agriculture 2016

The State of Food and Agriculture 2016 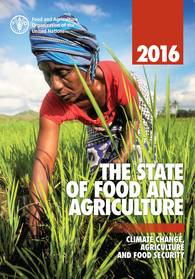 The Paris Agreement, adopted in December 2015, represents a new beginning in the global effort to stabilize the climate before it is too late. It recognizes the importance of food security in the international response to climate change, as reflected by many countries focusing prominently on the agriculture sector in their planned contributions to adaptation and mitigation. To help put those plans into action, this report identifies strategies, financing opportunities, and data and information needs. It also describes transformative policies and institutions that can overcome barriers to implementation.

The SOFA 2016 report and other complementary information products will be released on Monday, October 17, 2016.