Over the last 5-6 years significant advances, particularly in industrial countries, have been made in the development of genomic, proteomic, metabolomic and ecophysiological information on host plant, mycotoxigenic moulds.

MycoKey is the new project funded by European Commission under Horizon 2020 programme, Societal challenge 2 “Food security, sustainable agriculture and forestry, marine, maritime and inland water research and the bioeconomy challenge” – topic “ Biological contamination of crops and the food chain”.
MycoRed ’s objectives are to develop practically useful tools for quantifiable and significant reductions in toxin contamination of economically important commodities for food and feed.
Innovation is achieved at different levels in the food/feed chain and in the SME applications based on:
The overall objectives of MycoRed are: 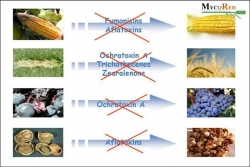 Related:
Peanuts, wheat and maize are important crops grown in Egypt for either local consumption or export to European markets. A study examined the importance of mycotoxigenic Aspergilli in Egyptian peanuts and maize from many different regions (such as Alexandria, Cairo, Giza, El-Beheira, El- Daqahliya, El-Sharqiya, Asyut) in three seasons (2013, 2014. and 2015).

A special set of problems arise when peanuts are shipped in containers. Even when a correct examination to test for aflatoxin has been performed in the country of origin, before the harvest was loaded, the shipping conditions may still stimulate the production of aflatoxin to such an extent that the consignment is ruined within a few weeks of being loaded. An aflatoxin test at the port of arrival will therefore reveal entirely different results to the one performed before loading. If the allowed values are exceeded, the entire consignment must be disposed of. Temperature fluctuations inside the container can be quite extreme, especially when the container is shipped on the deck. The peanuts “sweat” and then, after the outside temperatures have cooled down, water condenses and trickles down the walls. If condensation comes into contact with the peanuts or drops down on them, this causes an increased infestation of Aspergillus in that spot.

The cost of keeping aflatoxin out of the food supply amounts to hundreds of millions of dollars to the US and world economy annually. In that sense, in developed countries, aflatoxin contamination is more of an economic issue than a food safety issue (Egmond et al. 2007).

A research proposal was submitted to the African Union Research Grant (closing 31/08/2016) for the identification of natural substrates or active agents able to limit the development of toxigenic fungi and/or mycotoxin synthesis.