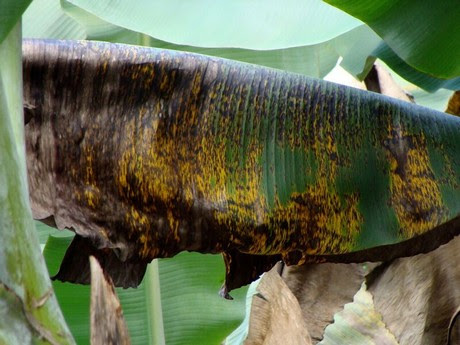 12 August 2016. An international consortium led by scientists from Wageningen UR (University and Research centre) has unravelled the DNA of Pseudocercospora fijiensis, the fungus that causes the much-feared black Sigatoka disease in bananas. The findings provide leads for increasing the sustainability of banana cultivation, for instance through the development of a resistant banana plant. The results were published today in scientific magazine PLoS Genetics.
Black Sigatoka
Banana production is threatened by various fungi. One of them, Pseudocercospora fijiensis (previously known as Mycosphaerella fijiensis), causes the black Sigatoka disease. The fungus is air-borne and occurs worldwide. It affects the leaves of banana plants in small and large-scale plantations, and results in huge yield losses. The disease also reduces the quality of the fruit, causing premature ripening. The bananas can then no longer be exported and growers lose their income. The Cavendish banana, the most commonly grown banana variety worldwide, is especially susceptible to the black Sigatoka fungus.

Spraying against black Sigatoka 50 times a year
Farmers who can afford it financially use crop protection products or fungicides to manage black Sigatoka. The effectiveness of these products often quickly reduces, however, which means that most commercial plantations have to spray increasingly often – over 50 times a year is common practice in many banana producing regions. This has a major impact on the environment of the plantations and costs the banana sector some 400 million dollars a year.

DNA sequence offers possibilities for disease control
Gert Kema, Professor in Tropical Phytopathology at Wageningen University and banana expert, led the research: “Black Sigatoka has a huge social, ecological and economic impact worldwide. Thanks to the sequencing of the DNA of the Pseudocercospora fungus we are now gaining a greater insight into the interaction between the fungus and the banana plant. This provides us with leads for increasing the sustainability of banana cultivation, making it better for the environment, the local population and the economy. For example, the insights offer us opportunities to develop a banana plant that is suitable for production and export, and which is also resistant against black Sigatoka.”

This fresh understanding of the DNA of the black Sigatoka fungus is also providing new information that is useful in the development of more effective and, hopefully, less environmentally unfriendly crop protection products. This could reduce the amount of spraying which, in turn, would improve the quality of life of the people working in the plantations and those who live in the immediate surroundings.

Can tomato DNA help banana?
The scientists also discovered that tomato plants recognise the substance of the black Sigatoka fungus via a receptor. The wild Calcutta 4 banana and the tomato apparently resemble each other genetically in this regard. A great deal is already known about the tomato receptor, and the gene for the receptor is also available. It would be relatively simple to build these tomato genes into the DNA of banana in order to develop resistant banana plants.

Financing and partners
Scientists from Brazil, Canada, Colombia, Costa Rica, France, Iran, the Netherlands, Switzerland, the UK and the USA worked together on the above referred article. The DNA of the fungus was sequenced by the United States Department of Energy – Joint Genome Institute and by Syngenta Biotechnology, Inc. The Dutch research was co-financed by the Dioraphte Foundation, while other scientists were financed by the Colombian Administrative department of Science, Technology and Innovation – Colciencias grants no 2213-452-2153 and 2213-569-34854, and by the National University of Colombia in Medellin as well as scholarship 187781 from the National Council of Science and Technology (CONACyT) from Mexico.